Why the Vegetarian Butcher?
The meat industry is putting a massive strain on our climate. Research by the University of Minnesota has shown that an extra four billion people could be fed if cattle feed is directly used for the production of food for humans. Transitioning to a more plant-based diet also reduces the suffering of animals. Still this transition isn't as easy as it might seem; lots of people continue to love meat. That is why society would benefit from the development of good meat replacements.

What does the Vegetarian Butcher do?
The Vegetarian Butcher sells meat replacements with the taste and experience of real meat. They have a wide range of products: from meatballs and tuna to chicken and sliced meats. The products are made from high-protein organic lupine, peas, soy, wheat, broad beans and field beans that were cultivated in the Netherlands. They also have a restaurant in the Hague, de Vleesch Lobby (The Meat Lobby) where plant-based meat is the central theme. The brand is working on a big transition from animal-based to plant-based meat. Their biggest goal is to have meat eaters experience that they don't have to miss anything if they don't eat meat (for once). The ambition is to become the biggest butcher in the world. The impact is even bigger: the success of the Vegetarian Butcher has led to a better image of all meat replacements, which means more consumers considers meat replacements as an alternative to meat.

What is the contribution to and of the creative industry?
As a former meat eater, Jaap Korteweg was convinced that people will only eat a meat replacement if it can live up to real meat in terms of taste and texture. This was a radical change in perspective: up until then, meat replacements were widely seen as 'surrogate meat', which outdated production techniques and methods to match. For this shift to work, they needed a technological development, focused on really getting the texture down. That is why The Vegetarian Butcher started working with the meat industry. Lots of people considered that fraternizing with the enemy, but it was the only thing that made sense to the Vegetarian Butcher. Because who better to imitate meat than the people who work with it on a daily basis? Together with other butchers, scientists and top chefs, they worked on optimizing the plant-based protein products for three years.

We consciously developed a mind-provoking concept

They also developed a revolutionary market concept. Niko Koffeman, co-founder of the Vegetarian Butcher: “We consciously developed a mind-provoking concept. A vegetarian would never walk into a butcher's shop and a meat-lover wouldn't go to a store that has the word “vegetarian” written on the storefront. We convinced people to think about our products: what is this? We constantly did that, like with our Nieuwvleeschduik (New Meat Dive) to promote our vegetarian smoked sausage and with “Schnitzelgate”, when people were arguing whether our product names were misleading. This also led to a lot of free publicity.”

But that wasn't all. Niko Koffeman: “A good product and a name aren't enough for an appealing concept, we had to find a way to convince people of our concept and have them understand our thinking. We decided to create a story that tells itself, with as little budget as possible. We did that by creating a nostalgic feel around our images, like vegetarians finally being able to eat a “frikandel speciaal” or a meat ball again. A lot of people think vegetarians don't eat meat because they don't like it, which isn't necessarily true; they just don't agree with how it's produced. This approach worked; lots of people were enthusiastic that they started sharing it on social media. One person shared a picture of their cat with our Fish-free Tuna. We built a really dedicated, enthusiastic fan base this way, something you can't do through commercials. They also help us continuously develop our products by providing feedback. 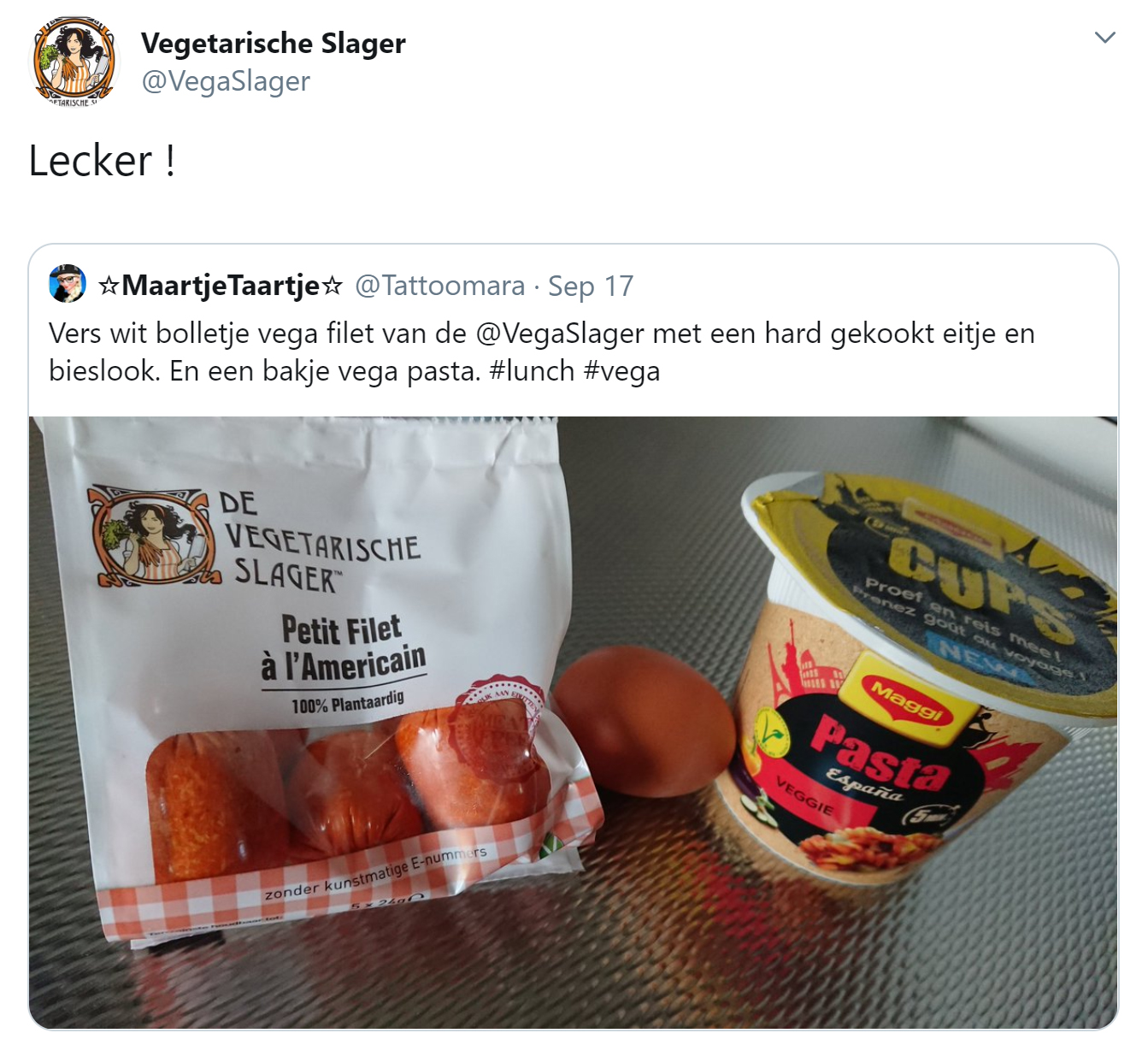 So what's next?
The Vegetarian Butcher continues to work on their goal of shortening the food chain by taking animals out of it. They are working on a machine that can produce large pieces of vegetarian steak with a consortium of large companies and knowledge institutions. The goal is to eventually decrease the size to that of a food processor, so that everyone can make customized meat in their kitchen using a protein powder mix. They are also working on vegan alternatives for dairy and egg.